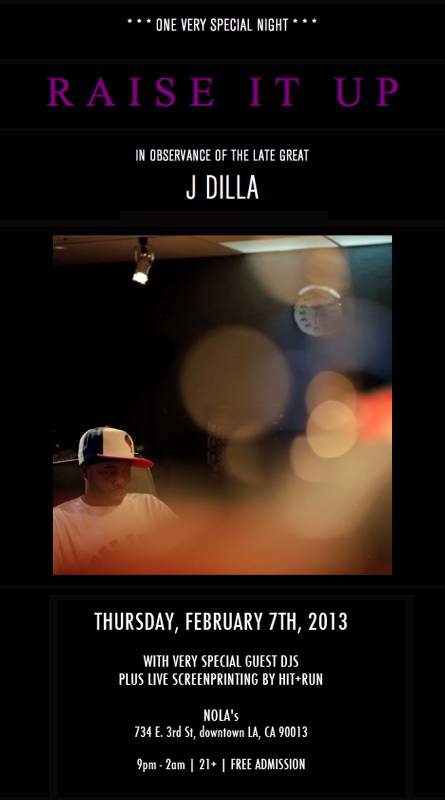 Each year in February we pay tribute to one of the most slept-on producer’s of all time, J DILLA. James Dewitt Yancey, also known as Jay Dee, J Dilla, King James, Dil Cosby, McNasty Filth, JD, Dil Withers or just plain Dilla, was an American record producer who emerged from the mid-1990’s hip hop scene in Detroit, Michigan. Dilla worked with big-name acts such as A Tribe Called Quest, De La Soul, Busta Rhymes, The Pharcyde, Common & many more including his group Slum Village, all the while releasing countless productions, solo albums, singles, beat tapes and collaborations up until his death. Yancey died in 2006 from a rare blood disease, but his legacy lives strong in the hearts of hip hop lovers around the world. Tonight, February 7th would have been DILLA’s 39th birthday, so Los Angeles is celebrating the birth of a legend! Join us at NOLA’s in downtown LA for “RAISE IT UP” one very special night in observance of the late great J DILLA, with an amazing line-up of guest performers including HOUSE SHOES, DJ RHETTMATIC, OH NO, BLU, MED and many more, plus a rare appearance by the spectacular FANTASTIC FOUR (J.Rocc, C-Minus, Mr. Choc & Truly Odd) paying tribute. HIT+RUN will be in the house screenprinting exclusives DILLA designs with all proceeds going to Ma Dukes. The event is FREE so there’s no excuse for anyone to miss this awesome night in LA….F the police, Turn it up, and Let’s go!